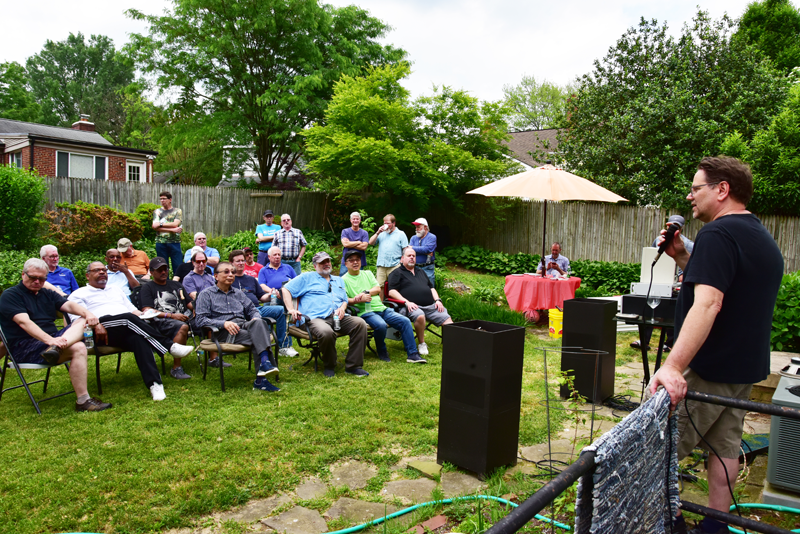 Spring time in our area is supposed to be such a lovely time and it seemed to be a perfect time for John to have an open house for our group.  Best laid plans of mice and men. Man was it hot and sticky. The warmest day so far this year! It happened to fall on Saturday so we suffered through it with beer and sliders. Even a surprise birthday cake for John, still a baby at a mere 60 years, could not dampen our spirits. But we were damp. There was a steady stream going in and out of the house to cool off.

We sort of muddled through a meeting. Mike McGary of McGary Audio was there letting us know what is new with his amp company.  He let us know that his newest amp the SA-2 is in production. A P-P KT-88 stereo amp pushing  80 watts. I saw and heard this amp at Axpona in April and it sounded great moving air easily with Salk speakers. Mike has updated the look from industrial sheik of the SA-1 to retro Googie architecture (also known as “populuxe” or “doo-wop”).

Can you imagine? It was so hot that Tom Perazella only spoke three sentences. Something about some stuff. LOL!

Anyway we did have fun. It was not all sweat and chafe. Giveaways were just three this month.  Michael got a 8TB USB drive (darn that’s what I wanted). Chris got a Parasound ZDAC, and Peter got a CD. See you all next month.

Category: DCHFG Meeting, From Our Blog